Ah, jet lag. Yes, it's 6 am; and no, I didn't go to bed early, like a smart jet-lagged person; although I got back to my apartment at 10:00 I stayed up for two more hours, fixing a pot of spaghetti and watching "Sex and the City." And unpacking, albeit in a rather haphazard fashion.

Today's just going to be kind of a grind, is all. I have three things to do:Okay, that's four things, but the fourth clearly doesn't count.

(Upon rereading this list, I fail to feel any self-pity. My schedule is so absurdly light. Where do I get off complaining?)

So where am I back from, you ask? Iceland! I can tell you that, because of course my conference wasn't actually in Iceland; I simply stopped over there on my way home. It's a weird and interesting place--I kind of feel like the entire time I spent there (about 48 hours) was a dream. There are so few people and so much wind. Yes, the wind is terrific. And everywhere there are flag poles with no flags on them, banging away in the wind. I don't think I ever actually saw it get fully dark, either, since I went to bed at around 10 on both nights and the sun seemed to be all the way up by about 4:30. The light is also remarkable, being always on the slant, and so the colorful houses on the hills of Reykjavic look terribly picturesque. Reykjavic itself, however, was not as picturesque as I'd imagined. In fact, it's somewhat stark, being neither particularly quaint nor particularly modern. The houses are mostly covered in corrugated metal which is then painted; the paint was usually chipped and peeling, owing, I imagine, to the harsh climate. This picture will give you an idea of a typical street: 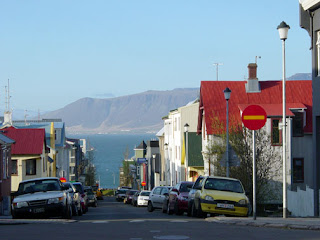 It's also extremely expensive. Here's the cafe where I ordered The World's Smallest $12 Sandwich: 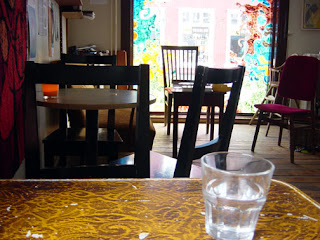 Seriously, it was about the size of a cracker. It was good, though. I ate only one actual "meal" per day while I was over there; it was all I could afford.

I started to write a more detailed post about where I've been, what I did, etc., but I'm not sure that such a thing would be all that interesting. I'm not particularly interested in writing it, at any rate. So here are just some thoughts and observations, in no particular order:
And on that note, I think I'll finish up. More later.

Congratulations on the story acceptance! That must be gratifying!

Sounds like you had an awesome trip. I don't think there is really that much to worry about when going out alone, as long as you don't get too smackered. The main precautionary measure I would take is to make sure you have enough cash for a cab fare, just in case you have someone pestering you and do not want to walk back to your hotel or hostel, lest they follow.

Hey congrats on the story being published! Wonderful.

I am so jealous of yuor Iceland stopover!! I have alsways longed for an Iceland stopover. Your post renews my interest, and perhaps I shall make it happen sooner rather than later...

Welcome back! Glad that the trip was good and I hope that the first leg of it was highly successful - did you get to see a fjord? A narwhal?

Congrats on your story as well - how did the phone interview go?

Thanks all! Yeah, it's exciting to get an acceptance. The first journal that accepted one of my stories has a circulation of 90-100; this one has between 150-190 subscribers. (Moving up!) I think that my new goal will be to have as many publications, but as few potential readers, as possible.

The phone interview seemed to go fine (the drunken Italians shouting at my back notwithstanding), but who knows? I haven't heard anything yet. A funny note: Their first question was the following:

"Given your excellent credentials, and the fact that you are no doubt being courted by any number of major research institutions, why are you interested in teaching at our SLAC?"

Well, it was flattering. (Actually I would like to teach at a SLAC, and not just because I'm not being courted by anyone, sniff sniff.) (Indulgently facetious self-pity there! I've done enough whining for one semester.)

Oh, and Iceland! Yeah, it was cool. But BRING MONEY!! Or, rather, have money available to you; I suppose it doesn't actually have to be in cash form.... You know what I mean. I do hope someday to go back and visit Thingvellir and the other natural landscape stuff. Also I love the fact that they still use thorns and eths.

Hey, you have flower bullets! --- How did you do that?

Your traveling sounds wonderful and I hope you have luck with your interviews!

Oh yeah, and congrats on the actual filing! Whoo-hoo! (I hope your picture for the brochure does not end up looking too jet-lagged, heh.)

Sisyphus--I don't know where the flower bullets came from; they just appeared when I switched to this ridiculously busy new format with all its frills and furbelows (or however that's spelled).