Stating your plans out loud guarantees that they will fail

It's crazytown over here.

No, I haven't graded at home yet. But I did take some grading with me this weekend, just in case. And I've only worked on my research for 6 of the last 14 days.

Here's the deal, though. Last Sunday night, Bonaventure's daycare provider had emergency surgery, so daycare shut down for the week. We patched together babysitting, but it cost more and covered less time than daycare--so we've been taking Bonaventure to office hours and meetings and just spending more time at home.

AND NOW, it turns out that daycare will be closed for THREE MORE WEEKS. WHAT ARE WE GOING TO DO????

As if that weren't bad enough, here's what else happened this week (in roughly chronological order):

I consider the fact that weren't relatively calm this evening to be a pretty major success.

Unfortunately, I have about 800 meetings coming up this week. And I'd rather not be chasing a baby/toddler--or actually nursing him--during a meeting with first-year Honors students. It's going to be an adventure.
Posted by heu mihi at 8:48 PM 6 comments:

So here's my thing. I'm making this massive effort to produce some new academic writing this year.* Lately I've been wishing that I had a job that truly valued research so that I'd feel a little more incentive to do some; when you have a heavy teaching and service load, no colleagues in your immediate (or even adjacent) field, and no one ever talks about their research (in fact, you suspect, 80% or more of your colleagues don't do any), I do believe that it's objectively harder to get this sort of thing done.

I'm trying to be realistic. I'm division chair and the director of the Honors program; I have three classes (and three preps) this semester; and I have a young son and a husband with whom I like to spend time. I also really appreciate having a clean house and decent meals, so we put some time in on that stuff. However, I've been vaguely "planning" the "second book" for like 3 years now, with nothing much to show for it except a couple of semi-related journal articles. I don't want to non-write and non-publish myself right out of my field.

So I'm trying three new things, the first two of which are bound to fail sometimes--but I hope that I can be forgiving and just start again when I have to.

1) Grading happens in the office, and only in the office.
I have an outstanding track record for returning papers: They're back within a week, no matter what, and sometimes even sooner. It doesn't have to be that way. If I get papers on a Tuesday and they don't go back until the following Thursday, no one will care. So far, this resolution is forcing me to use my office hours productively, rather than just futzing around filing and shit. And it is so liberating to not even put grading on my weekend to-do lists!

2) I'm writing for half an hour a day.
Okay, I've managed this for four days now, which isn't exactly earth-shattering.... But dude! That's two hours of writing that I wouldn't have done! And I'm actually being pretty intense about it--mostly; since it's such a short period of time, I'm trying to jot down as much as I can very quickly, rather than screwing around online. (There is some screwing around, but it doesn't count towards my half-hour, so there's little incentive to engage in it.) If I keep this up, I could conceivably have a very crappy draft of part of a chapter done by the end of the semester!

3) I'm writing along with my junior-level composition students.
The junior-level comp class is focused on one major paper, which they spend the second half of the semester writing; in the first half, they summarize and synthesize academic articles, pursue bibliographic threads, and the like. I've told my students that I'll do similar assignments all semester (adapted to my own project, of course) and post them on the course website as optional models for them to look at--with the idea that I, too, will produce a 10-page (or longer) paper by the end of the semester. I managed the first assignment, and I'm a little ahead on the second (not due till early October). I think that this will both give me deadlines and let me see whether my assignment sequence is actually helpful for paper-writers.

So that's it. Wish me luck as I try to make my research actually important to me!

*To be fair, I produce new academic writing pretty much every year, and even get some of it published. My publication record is quite good for someone at my type of institution--a book and 5 peer-reviewed articles, plus book reviews. But it's not going towards some big, new, exciting project, and that's what I miss--the feeling of being caught up in something larger than an article-length argument.
Posted by heu mihi at 8:44 PM 4 comments:

Belle, in her comment on my last post, gave me an easy out for another post: Pictures of Bonaventure. So here they are! Isn't he cute? 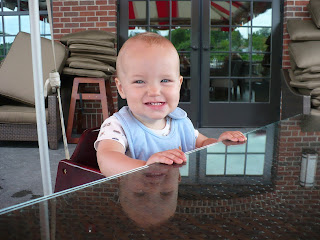 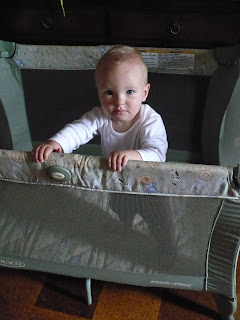 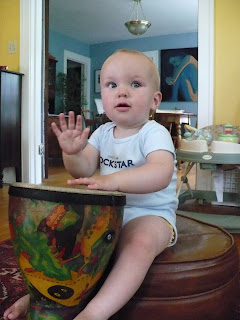 Is this blog dead?

OK, so. I haven't posted on this blog since May, people. Have I stopped blogging? Well, de facto, yes. But that doesn't mean that I've done so forever, or anything. Clearly, I still read blogs. And comment on them.

And I really don't feel like a big announcement is in order either way.

So I'll just tell you about some things that happened today:

1) I was quite cranky this morning, feeling stressed and struggling. We're in the third week of classes, and already Bonaventure has had a cold, then an ear infection which meant that he had to come to class with me, and then TM had some kind of flu this week. It's been rough.

2) But Bonaventure came home from his half-day in day care (we pick him up at 12:30, because he still nurses and will NOT nap without a nurse) in the sweetest mood ever. After his nap, we were sitting together looking out his window, and he was still being super-sweet. I kept kissing his little cheek, because it's so soft and perfect, and then I said, "Do you want to give Mama a kiss?", and then, "You have no idea what that means, do you?" But he smiled a little bit, leaned over, and pressed his lovely little lips to my cheek. My day was made. My whole year may have been made, in fact.

3) And later in the day, while TM and I were both hanging out with him, he stood up all by himself in the middle of the room and took his first steps. I'm so happy that we were both there for that!

4) I may actually and for real be co-taking a group of students to England for Spring Break. With an almost-all-inclusive travel company, which is pretty much the only way that I'd be able to stand such a thing, let alone be excited about it.

5) I just had my first taste of homemade peach ice cream made from OUR OWN PEACHES, which have been growing in WILD abundance from the peach tree TM planted 2.5 years ago. We've put up 4 gallons of sliced peaches, made sorbet and ice cream, and given away many dozen--and are still drowning in the unbelievably delicious suckers. My God. I'm teaching The Iliad, and I now have a very vivid image of the ambrosial nectar with which Athena sustains Achilles when he's hunting Hector. My goodness. I used to like peaches; now I know them to be divine.

And now I need to go get Bonaventure's lunch ready. Else we will never get out the door tomorrow.
Posted by heu mihi at 10:16 PM 4 comments: