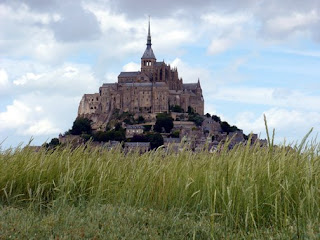 Once again, I find myself overwhelmed and paralyzed by the wealth of things that I ought to be blogging about. So, once again, I will simply jump in and write something, as disappointing as that something will doubtless be, and probably forego lengthy narratives about my trip (which would be uninteresting to all but a polite few, I'm sure).

I did, however, promise pictures. So here are three more: 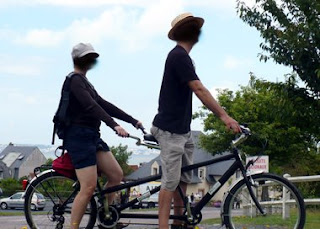 That's me and TM (faces blurred) on a tandem bike near Villerville, in Normandy, atop a preposterously long hill. The bike riding was fun. However! I am a fairly established bikerider--or I was, having completed an AIDS ride in 1999, at which point centuries were a more or less weekend occurrence--and thus reasonably hardened to bicycle seat discomfort. The seat of this bike seemed pretty cushy: broad and modestly padded. But by the end of the day (we probably rode 25 miles, maximum; it was slow and heavy going), I felt that what a yoga teacher might call my sit-bones were being ground to a fine powder by means of rotation upon a granite slab. It hurt to sit down for the next two days. TM experienced discomfort, as well, but described his as more of an "impaling" sensation. We were delighted to return the bike at the end of the day.

But don't we look smart in our hats?

And here is the bizarre new branding that I discovered in Honfleur: 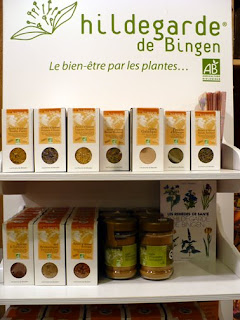 Hildegard has gone into business; apparently the abbess/visionary/renowned advisor thing just wasn't sufficiently lucrative. But hey, at least her remedies are organic.

This is TM admiring some curvaceous half-timbering in Honfleur: 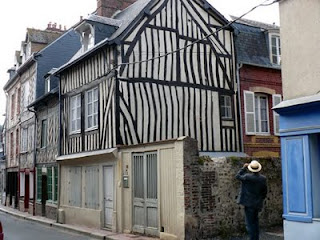 Don't you like his hat? Unfortunately it was left behind in Paris. But since it was primarily suited to the resort-towns of Normandy--being all Proustian and all--perhaps that's for the best.

School starts soon, so substantive blogging may resume at some point. (Though there is that pesky wedding thing coming up in two weeks....)
Posted by heu mihi at 9:28 PM No comments:

Leeds vs. Kalamzoo: The Death Match

(That title really is too cheesy, I know. Apologies.)

Apologies, too, for the long gap--but seriously, France? Get some frakikn wifi already. What the hell? The like THREE places in all of France that claim to have wifi actually don't. In two of them, the owners (of the cafe or in one case a wine shop--why a wine shop advertizes free wifi is a cultural difference that I will not dare to explore) actually lent me their laptops. This was very nice of them, but certainly made me email in haste rather than blog at leisure.

So I'm at Leeds, and, as I don't have the proper outlet adaptor, will not be able to spend extensive time online for the next couple of days. Rather than regale you with hilarious pictures from the first week and a half of my trip (I promise the following: Me and TM on a tandem bicycle, wearing preposterous hats; a re-enactment of Marie de France's "Les Deuz Amans"; and Hildegard of Bingen's line of homeopathic remedies--they're organic!), I shall instead provide an itemized comparison of the most essential elements of the two major medieval congresses.

(Bear in mind that I have attended one Leeds panel so far--I arrived this afternoon.)

Dorms: Despite the shared bathrooms, Leeds wins. Vastly more comfortable beds (and it was made when I arrived! No monastic brown coverlet!); only one bed per room; non-cinder block walls; and a quaint little sink in the corner. I am also conveniently located near the hilariously titled "Female Toilet," so things are good.

Dining halls: Can't make an educated guess. I've only eaten in the Kalamazoo dining hall once or twice, and that was in 2003, so it wouldn't be fair to say. Leeds' food isn't bad so far, though.

Book exhibit: Here's where Kalamazoo scores some points--it's much bigger--although the more European orientation of the Leeds exhibit at least ensures that there's not too much overlap between the two. But as I'm saving suitcase space for wine and calvados, I won't be buying many books, anyway. (Still, it's fun to look.)

Conveniently, the two people whom I know at this conference also know each other. I had no idea. How nice! Just had a lovely dining hall dinner and a drink at the dorm bar (score another point for Leeds!) with both of them.

Paper is in the morning. I've convinced myself that it's better than I thought it was. We'll see--no one reads my main subject, so I anticipate roundabout questions.
Posted by heu mihi at 3:14 PM 6 comments: