I'm teaching a seminar on Monday nights this semester. The other day, I realized that this meant that I'll be teaching on the night of Valentine's Day. "Well, that's kind of too bad," I thought idly. I don't care deeply about Valentine's Day, but some students might care, a bit, and anyway, it could be an excuse for some candy. So I reflected further: "I should do something fun in class that day to commemorate it. But what?

"It should have something to do with what I'm teaching. Perhaps I'm teaching a love vision, or something. Hey, what am I teaching that night, anyway?" I asked myself.

I checked. And...lo! The Parliament of Fowls!

How weird is that, eh?

If you're not a medievalist, I'll tell you: The Parliament of Fowls contains the first known English reference to Valentine's Day. HOW WEIRD IS THAT????

Also, I consider that in itself to be sufficiently celebratory, which means that I'm off the hook for bringing candy. Sweet!

Tired of being COLD

We're five days into the semester and it's going swimmingly. Quite swimmingly, in fact. Classes are good. I'm enjoying myself. There are interesting things going on at the college (we're hiring! three people!!). So that's all very nice.

But the heat in our office suite has been out for TWO WEEKS--the furnace is busted--and we're all using space heaters that blow fuses on a regular basis, which means that the chair and I need to take turns heating our offices. And unless I actually set my heater on my desk, the surface of my desk, the mouse, and the keyboard remain very chilly. This little feature of my workday, combined with the fact that TM and I never, ever heat our house above 64 degrees, means that my fingers and the tip of my nose (and sometimes my legs, shoulders, neck, arms, etc.) are NEVER WARM.

DUDE. I am TIRED of being COLD.

(Our furnace should be functional by the end of the day tomorrow. Here's hoping.)
Posted by heu mihi at 9:30 AM 4 comments:

I just ordered a bunch of stuff from here. I didn't mean to order as much as I did. But every time I checked my shopping bag, something else was out of stock, so I finally hit "check-out" in a panic, and now I'm hoping that I don't live to regret the almost-$250 I just dropped (in my book, that's a lot to spend on clothes).

On the other hand, we bought our house in haste, and it is a delightful treasure! --And with that ever-so-natural segue, I shall finally (FINALLY) put up the rest of my house pictures, since I'm sure you've been dying to see them. 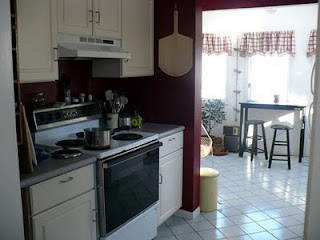 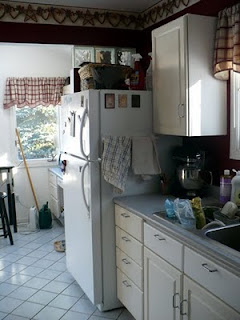 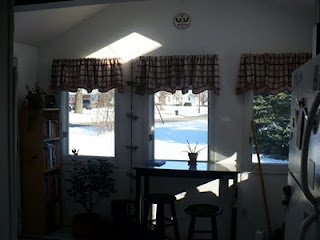 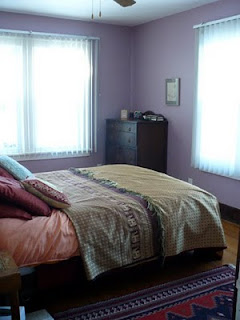 The basement (not terribly exciting, but it is mostly finished): 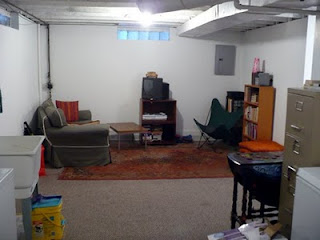 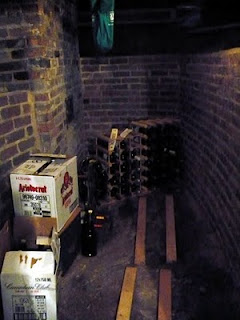 And...the bathroom. Admire! Admire! This sucker took me like a WEEK to paint. 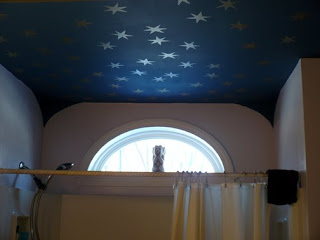 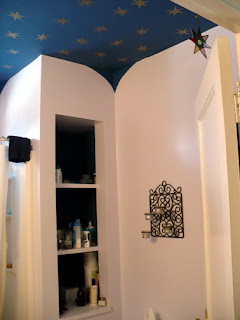 Note the Gothic cathedral theme: gold stars on a dark blue ceiling, corners that are suggestive of a dome, a gargoyle, the candle-holder. Here's the power switch (I cut out God to make room for the switches): 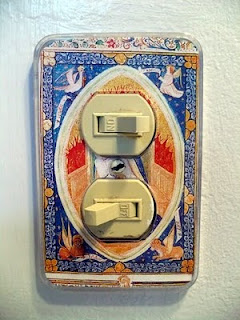 And here are some little pictures I put up (I paid $0.60 for all four frames, and the images came from medieval conference CFPs and catalogues). What puzzles me is that people always tell us how cute our bathroom is; apparently they haven't noticed the bleeding Christ or the suicidal woman. 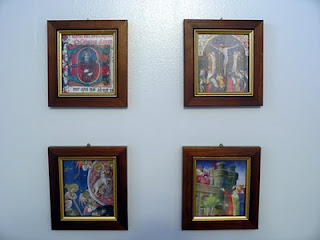 Funnily enough, we are daily tormented by a cardinal who is determined to fly through the window of the bathroom. As TM remarked, "It stands to reason that the cardinal would seek entry into the Gothic cathedral, no?"
Posted by heu mihi at 12:11 PM 16 comments:

Well, this is different.

My first year of teaching, I started every semester--nay, every day--quaking with dread. Okay, that's an exaggeration--but a really slight one, honestly. I feared teaching. I looked forward to its end. Sometimes, during class itself, I liked it all right...but I inwardly rejoiced at the end of every hour, every week, every semester.

That's no way to live a life, right? Just waiting for it to end?

As it happened--and as typically happens, and as I expected to happen--the dread and the fear diminished with time. In my second year, I noticed that I did not actively dread each class; I even seemed less sweaty. By last year (my third), there was little or no anxiety most of the time; I no longer feverishly reread my notes right up until class time, and I had figured out that just being, you know, a mostly-normal person in class, one who talks to students and pauses and makes jokes and whatnot, made teaching feel almost natural. This year, I'm feeling even more at my ease, and I like getting to know my students and interacting with them in class (for the most part).

Today was our first day back; I just had one class, at 9:30. I wasn't nervous (not consciously; my body does persist in having some first-day-nervous-symptoms, but I don't actually feel it in my brain, which is where it counts) (if that makes any sense) (okay, to give you an example, at one point I just kept dropping the caps of dry-erase markers on the floor, and I noticed that my hands had a little shake to them, which surprised me, because I didn't feel nervous. That's what I mean) (I also like completely lost my voice about 10 minutes in to class--which is something that I think happens in the first class of every semester, now that I think about it! I'm going to need to start carrying water on Day 1) (and I'm going to end this sentence now because it's way too long).

I wasn't consciously nervous (how's that?), but neither was I, like, thrilled to be back in the swing of things. When people say that they're eager to get back intp the classroom, I don't really know what they're talking about--as much as I like my job, I would always rather be able to stay home and read some interesting books than to have to go someplace, and be prepared, and talk, you know? But today, about 20 minutes into the class, I realized that I was having fun.

And even when I first walked in, I said "Good morning!" with more real enthusiasm than I think I usually do. And I was happy to see the students whom I've had before.

And, as I was leaving class and a new class was filing in, several of the students in the new class waved and greeted me cheerily. One did pretty miserably in my class last year--but it was good to see her. I felt...happy.

So, um. This probably makes it sound like I'm normally a miserable wretch who hates teaching; such is not the case. Teaching is pretty fun. But, again, I'd always rather be on vacation. But today? For a little while? I was happy to be back in the classroom.

How freaking weird is that?
Posted by heu mihi at 1:33 PM 4 comments:

THERE. That wasn't so hard, was it?

You know how, when you have one paper to grade, it's like the most difficult thing in the world?

Well. I've had a paper (fulfilling a well-deserved Incomplete) sitting on my desk since I got back from my holiday travels--that is, for 16 days--and I just couldn't bring myself to deal with it.

And, since classes don't begin until Tuesday, had very little incentive to grade it (other than to finally cross it off my list of things to do).

So, tonight, finally, I made myself do it--in part because I spent the early part of the evening clearing miscellaneous papers off of my desk (this is my home desk, mind) and it felt good, so I wanted to get this thing off, too.

And yes, it was an excellent paper. It got an A. And it took me all of 15 minutes. And it was an interesting paper that I actually enjoyed reading.

So what in the world is my problem, anyway?

I think that we need to resurrect this old picture: 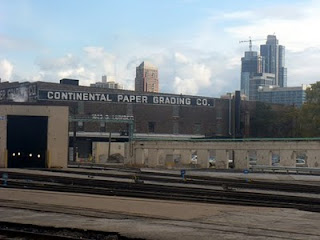 We got back at around noon yesterday--after an all-day drive on Thursday, a little dinner party and an overnight in City to the North, and then a mere 2.5 hours of driving yesterday. It's good to be here--everything is exactly where it ought to be. Both TM's parents and my mother are not...um, like us (or, especially, me) when it comes to housekeeping and home arrangement. TM's folks just have loads of stuff--stacks of magazines and books and papers, boxes and boxes of crackers or whatever--stashed around the house (not like hoarders, but like people who don't get rid of stuff--there's a difference, really), and my mom is an artist whose dense, dark, creepy little collages sort of expand out to fill the entire house. Her house is very interesting, but it's also a complete mess and drives me a bit crazy. We, on the other hand, are all about the open space and the findability of objects and light coming in through the windows and whatnot. I love our house.

New Year's Eve was a very quiet affair. We're both still recovering from the Most Enduring Colds Ever, and were also rather tired; thus, we spent the early afternoon having a Family Nap with the cats in the guest room (they're not allowed in the bedroom). In the evening, after dinner, we watched a couple of episodes of "The Office," ate chocolate cake, and were in bed before 11. Hurrah! I despise watching the ball drop (which we, being sans TV, couldn't really do anyway) and find New Year's generally overrated; since not a one of the parties that I've been to in Field Town has lasted past 10:15, I couldn't imagine that even a party would make it to midnight. Besides, there weren't any parties. So it was quite lovely to go to sleep and wake up at a reasonable hour, very rested, on New Year's day.

So today, I shall do the following, in an effort to a) get back on track with some stuff after the long trip and b) start the year off in a constructive fashion: 1) practice yoga at some point, and 2) work on an article proposal. Perhaps I shall also knit. And I need to walk down to the office to pick up an article. Oh, and I need to make granola.

Resolutions? I have two. One is to get my yoga practice in order. I subscribe to this online thing where I get streaming yoga videos for a very reasonable price, and I need to just do one of them every couple of days. That's all. The second resolution actually comes out of that reverb10 thing where people had to come up with a word that they wanted to define 2011. It made me think about how quick we are to think about resolutions in terms of improving our own lives--but maybe it'd be good (at least for me) to think outside of my own comfort? So the word/resolution that I thought of was "Kindness." I'm going to try to be kinder, just in general. Not that I'm horrible as-is, but I can be selfish, and impatient, and surely my comments on students' papers could be less sarcastic now and again. Thus, resolution no. 2.

I shall conclude this post with pictures of the guest room, which is where we napped yesterday. Enjoy! 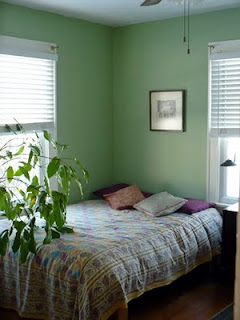 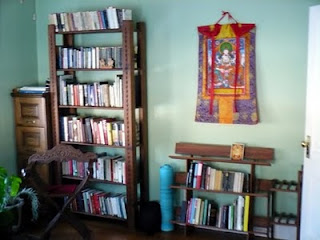