When you don't really see your students 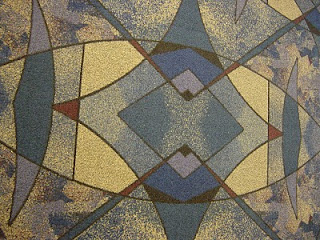 Las Vegas airport (3)
You know how, sometimes, you're looking at a student in class and listening to what she's saying, and then you realize that you're not really listening at all? And yet you're doing all the nodding and eye-widening and everything else that goes into managing a class discussion?

And you know how, sometimes, your eyes cease to focus at all? Sometimes you can't even make your eyes focus, which is a little troubling--with the result that you start thinking more about how there should really only be one Cody instead of three than about what Cody is actually saying.

(No offense to Cody. I find that this is more typically the result of fatigue than it is the result of anything that Cody may be saying.)

Well, I can do you one better.

Last year, I had a student in Comp named (for the sake of argument) Susan. Susan was a hard-working but fundamentally unprepared young woman who struggled quite a bit with the basics of writing--her papers had a lot of grammatical errors and tended to be rather ponderous, heaving along without ever saying very much. But Susan was conscientious about meeting with me to talk about her work.

One day, I was headed over to my office for a meeting with Susan. It was very bright and sunny out, and--a propos of nothing, of course--I had just started taking a new heart regulator (this was prior to my surgery--I'm no longer on any meds). I stopped in at the mailroom first; the building that it was in was dark compared to the brightness of the day outside, so I wasn't too surprised when, as I looked at an envelope from my mailbox, I saw one of those little squiggly sunspots that you sometimes get when you've been looking at a bright light.

I went back outside and entered my building. The sunspots were still there, but whatever--they happen.

Susan is waiting for me, and we enter my office. She sits down opposite me. I'm having trouble seeing her clearly, what with the sunspots and all, but they'll pass, right? She gives me her paper and I start to look at it.

[I just noticed that I've just switched to the present tense, but fixing it would be such a bother. Please bear with me--it's been a long day!]

Something is wrong. The sunspots are growing and seem sort of...striped? In a vibrating, zig-zag way? It's hard to describe. I'm having a tough time reading her paper. I look at Susan, and I can't see her face.

Now, despite the fact that this is something I've never experienced before, I don't actually panic, because my mother gets ocular migraines pretty frequently and has described them well enough that I can immediately identify what's happening. I know that it should pass in about twenty minutes, and there's no discomfort--but it's so weird; it's like my brain isn't registering anything where her face is. It's a gap, a hole, a shimmery...deflection. Susan is talking about her paper; I listen to her, sort of, but I'm also pretty preoccupied with marvelling over the nothing that is where her face should be. I can see her hair; I can see everything else--at least, in my peripheral vision; wherever my eyes focus, there is nothing. Just a...lack, a lack that is also somehow full of vibrating light.

I look back at the paper. Obviously I can't read it. Well, I mean, I can read the words at the edges of the pages, but only where my eyes aren't focusing. I can't read the middle of any lines. I can't read where I'm looking.

Clearly, what I should have done at this point was to tell Susan that I was experiencing a bizarre neurological phenomenon and could she please come back in fifteen minutes. I should have said, "Although I appear to be completely normal and am, in fact, entirely calm, I can no longer see your face nor can I read. But I'll be fine in a quarter of an hour, so can you hang on until then?" But it seemed so preposterous and above all alarming that of course I said nothing and somehow managed to piece together enough of a sense of the paper out of the corners of my eyes (which is really hard, if you've never tried it) to give her some kind of advice (God knows what I said) and send her on her way.

The ocular migraine passed in a predicatable fashion, and I was fine.

I then promptly called the doctor and he changed my prescription.

(It really is a coincidence that the carpet looks like some kind of crazy eye.)
Posted by heu mihi at 7:23 PM

Good heavens! I was all set to chime in with a "me too!" about the finding yourself nodding and "mm-hmm"ing and doing all of the other listening tics without actually listening, but I'm glad to say that my experience then veers sharply from yours when we enter ocular migraine territory. I'm impressed that you pulled off a successful paper conference in the midst of that!

Fie upon this quiet life! said...

I remember last year when I was teaching nine months (+) pregnant and I would be standing there at the podium listening to whatever someone was saying -- then I'd have a contraction, and I'd just tune out for a minute. It was like my whole body was against me. Even when I'd sit down, I still had the occasional contraction or mild to severe discomfort. That last month of school? I was pretty useless. Of course, I turned in my grades on Dec. 17 and baby was born Dec. 19, so go figure.

I, too, am glad that nothing more serious was going on with you -- although I admit that sounds damn scary!

I get these kind of migraines all the time and usually the aura/ocular phase is followed by a strong headache, unless I take migraine medicine during the aura phase (so in a way this phase is useful for knowing that now I need to take the medicine and I'll be fine with no headache afterwards). They also get worse if I am taking any kind of hormones, so maybe if this was the first time for you and if you recently started taking anything like that, that brought it on? The shimmering lights usually start in the focus of the field of vision and then they gradually expand towards the periphery and disappear in about 20 min or so (as you say). It's not really dangerous, except if you are driving (then pull over and wait) and annoying when it happens during meetings, exams and times when you need to read.