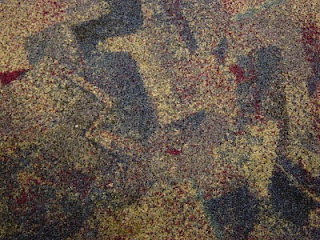 Las Vegas airport (1)
I tried a few new things this summer. New-old things. The first was meditating; as I said, I'm keeping this up into the school year, as far as I can.

The second was to take my diary more seriously. I chose this goal rather than the grander one of writing, say, a page a day; basically I wanted (and want) to have a diary that says more than "Long day I'm tired" and that actually describes or discusses at least one small thing every day (or so).

I've kept a diary regularly since I was fourteen, so--wow, about exactly twenty years now. In my youth, I wrote nearly every day, and often at length; once I started having relationships in which I didn't sleep alone in my bed every night, that regularity weakened. I still wrote often, but not daily, and occasionally a week would pass (and still passes) in which I wrote/write nothing. I don't usually reread my diaries, although I do consult them now and again, so detail and a thrilling narrative aren't exactly important. But I decided early this summer that "taking my diary seriously" meant giving serious space--if not daily, at least often--to reflection and absorption. So that's a thing that I'm doing.

That sounds silly, I know. The thing is, I started noticing how the instant I had the toothbrush in my mouth I would start rushing around and doing something--turning on (or off) my computer, checking my email, straightening up the cushions on the couch, whatever. This was not only weird, but it was hard on my toothbrush: if I got absorbed in an email, say, I would find myself absently gnawing on the bristles whilst contemplating a response. And then the toothpaste might start to...manifest itself--it was gross, and weird, and honestly, I am not losing productivity by taking a freaking minute to brush my damn teeth. Besides, can I not relax and just do a thing now and again? Why must I let myself be so constantly distracted?

So that's the latest resolution. When I brush my teeth, I stare at myself in the mirror and brush my teeth. If a cat is in the room, I am allowed to pet the cat (and even to sit on the edge of the tub and place her on my knee, if I like)--but that's it.

Just brush your damn teeth. The world moves fast enough on its own.
Posted by heu mihi at 8:41 PM

If I attempted to do other things while brushing my teeth, I would have flecks of toothpaste everywhere. (I use an electric toothbrush.)

Heh. This is the best iteration of "be present" that I've seen anywhere.

Also, I am amused at your habit of photographing bad carpets. The closest I've seen to that is a friend of mine who has an affectation for photographing people's butts, preferably in awkward poses. Yours, thankfully, is the more internet-friendly practice.