As Flaubert would say 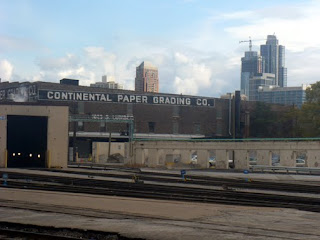 This place is real! I have seen it!!!

...and sometimes, in bleaker moments, I wonder if this is not truly a self-portrait, if the Continental Paper Grading Co that I see in the picture (or out the train window, as it may be) is not in fact a glimpse of my own face, half-caught in a shaded mirror, as when one sees oneself in a hazy plate-glass reflection where one did not recognize a window, and for a moment, thinking that the reflection was another person--pale, expectant, with an unfamiliar expression half-formed upon the brow--recognizes with a shock that this unhandsome creature with the look of bland self-concern and the slouching, humdrum posture is oneself, a recognition that causes a dim shudder of revulsion and yet at the same time an anxiety, a desire to protect that vulnerable figure, that figure who, because semi-transparent (being a reflection in the smudged window of the Radio Repair Commission, a shop whose purpose has until now eluded you), seems so fleeting, so ill-formed, so poised to tumble into the forgetful abyss that lies in wait, always, perpared to catch every bourgeois woman, including this very one, on her fitful rounds of the cat food mercantile, the apothecary, the cheese depository....

Brilliant! I'm saving this photo to post next to my desk, where I, too, take on the identity of the Continental Paper Grading Co.