Well, so, the wedding

--was lovely. Truly. Just what we'd hoped for. After a week of anxiety and tension headaches and a variety of things that almost went wrong the day of, including:
But: the construction was done by four o'clock (our wedding time), we called everyone who might have had a GPS and they all showed up on time, and the neighbor agreed to reschedule his construction.

The ceremony itself was lovely. I enjoyed it even more than I'd expected; I think that I'd imagined feeling embarrassed and a little uncomfortable, up there in the front of the church, but instead I was just happy. Our friend--who is also an Episcopal priest (but mostly a professor) (this is what you get when you marry a minister, by the way)--performed the wedding itself and did a magnificent job, despite its being her first wedding. It was very hot in the church--no air conditioning--and I could feel the sweat running down my arms and legs; woe betide the men in suits, for I was this warm in only a light cotton dress! But despite the heat, I felt wonderful: strong and confident and beautiful, not at all how I thought that I would feel, as goofily self-conscious as I usually am. Maybe having my sister-in-law and her sister gush over how BEAUtiful! GORgeous! I was for an hour before the ceremony had a salutary effect. TM had tears in his eyes. It was, all told, even more moving and joyous than I had anticipated.

(I was also very pleased with my last-minute bouquet decision: I had bought some gerbera daisies and a few regular, white daisies at the grocery store that morning, and my stepmother wrapped them together with a bit of raffia and purple ribbon. The bright simple colors of the gerberas against my white dress (cotton, as I've said--it was a sundress from J. Crew) looked really nice. I'd also picked out a yellow daisy for TM's boutonniere and wore (fake) yellow and white flowers on a barrette in my hair. In the few pictures that I've seen so far, it was visually all very clean and cheerful.)

The reception was in my mother's backyard, and we (along with my family, who were enormously helpful) worked all week to get it ready. My brother was the sound and lighting guy; he actually gave us, as a wedding gift, this gorgeous stereo, which he made himself: 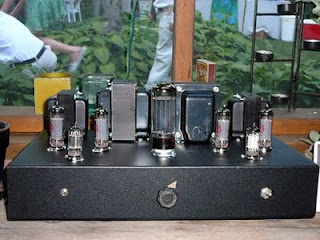 He taught himself electronics, a fact that continues to astound me.

The yard itself was very cute, with lots of flowers, white helium balloons, odd sculptural things (my mom's an artist), and prayer flags: 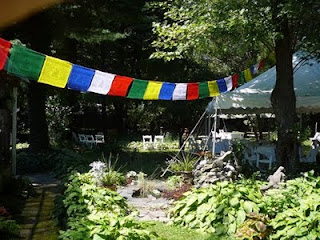 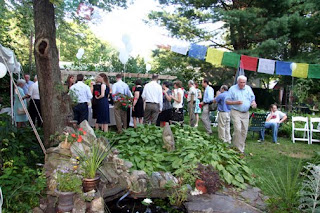 (during)
We'd had a big pizza dinner the night before, which most of our guests had attended; this took a little of the talk-to-everyone pressure off of the reception itself. Still, my one (inevitable!) regret was that I didn't get a chance to spend as much time with ANYone as I would have liked. Oh well! Now my desires for various trips to visit friends and family is only renewed.

Enough dilly-dallying for the morning: Classes start Wednesday. Am I ready? No! So I will leave you with one picture that will disappear in short order (but it's one of my favorites, so far--we've only seen the pictures that my parents took):

Oh ! You really do look radiant! And I don't think I've ever heard a more moving description of a wedding -- I love the fact that you felt strong and powerful and beautiful during the ceremony! Congratulations to you both!

You do look absolutely beautiful and SO happy - I'm just thrilled for you, HM! The entire thing looks exactly like what you guys wanted and I think that's amazingly great...I look forward to hearing more about it and seeing more pictures (off blog)!

I love the flowers, the prayer flags, the happy couple. And yeah, you look radiantly happy! Best of all things and may the path ahead be filled with love and good things.

Sounds like a perfect wedding and day! Congratulations! You do look BEAUtiful and GORgeous!

I concur whole heartedly with everything above! You both look radiant and happy and wonderful! I'm glad it was what you wanted, imagined, and hoped for! Congratulations again!

I love the photo and the description of the wedding! One of my pet peeves in life is the notion that weddings are a chance to play princess for a day, but it sounds like you all brought your real selves to the altar -- I'm so happy for you both!

Congratulations! It sounds and looks like a lovely wedding.

I'm so glad I didn't miss the picture--because you DO look gorgeous, and more importantly, happy and in love.

And I second WN: it's so nice to hear about/see a wedding that looks genuine, and true to the two people it's uniting. Congratulations!

Oh I'm so glad I got to see the picture of you and The Minister before you take it down! You both look so genuinely happy. I love the DIY nature of your wedding and the authenticity of it all. A huge contrats!!

Congratulations indeed! I agree with everything everyone has said so far (double-agree with WN) and will now shut up.

You look so lovely and happy! Congrats to you both! And to the daisies, which also look happy!

I agree with Flavia about the apparent "genuineness" of your wedding, and I would also say that it's so elegant and there seems to be so much warmth. And I'm stoked I saw the picture.

Oh, and I love the combo priest/professor types.

You look great! Both of you, but you especially! So happy!

It makes ME happy just to look at you.