I'm back! And my brother's wedding was, indeed, fabulous. As this was the first time that I myself was actually in a wedding (I'm 31 and no bridesmaid's dresses--surely this is some kind of record?), I'm pleased to add that I didn't screw anything up, either. No small feat, given that it was a Catholic service and my family is not Catholic. As the maid of honor, I had a lot of sitting, standing, walking this way, standing here, facing that way, holding hands with the priest, embracing the best man, etc. etc. to do, and I spent fully half the ceremony worrying that I would forget when I needed to re-collect the bouquets. Fortunately the priest, who is naturally rather experienced with such ceremonies, muttered stage directions to us pretty much the whole time. So it went off without a hitch, and my little brother is married! And I have a splendid sister-in-law!

But, as is usually the case, it was the reception that truly made the wedding. First of all, the weather was perfect. Low seventies, sunny, very little wind, and clear clear clear. The reception was outdoors, in a beautiful spot on a hill beside a river, and behind the river were low mountains; the setting was glorious and the climate cooperative. It was a biggish wedding, with about 180 people in attendance (most of them on the bride's side), but (wisely) the couple had decided to dispense with most of the Traditional Reception Activities in favor of something much more their style. So, after the (brief) introduction of the wedding party, the bride and groom danced their first dance to a song performed by my dad and stepmother, who are excellent musicians and sounded great. Then there was an open dance party and much drinking and eating before the toasts--one of which I made. Yes, almost as big a milestone as my brother's getting married was this, My First Toast. People laughed when I wanted them to, so I was pleased. And here's a picture of me giving my toast (it's silhouetted, so I can post it). Note the admonishing finger: 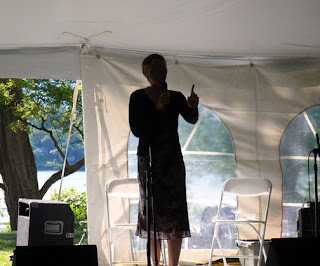 The truly fabulous part was the second half of the reception, though. My brother in particular is very musical, and so are a lot of their friends, so they basically opened up the microphone and dance floor to various performances for the rest of the night. There was Irish step-dancing, an African dance, some kind of Irish fertility play (or something), and folk/rock numbers, including covers of a Tom Waits song and James' "Laid". My brother and his wife also performed a bit, since Brother plays guitar (among other things) and SIL sings. And, for the grand finale, my dad and my mom's cousin played some music the Mustang Sally genre, finally joined by my step-mother on vocals and my brother on guitar. Here's a picture of them playing (faces blacked out;* from left to right, we've got my cousin, my brother, my dad, and my stepmom). 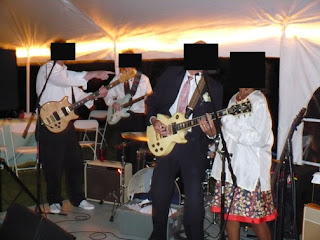 Oh, and they served a huge stack of pizzas a couple of hours after the real dinner.

It was great--entertaining and moving and just plain fun. SIL's family rocks, too, so it was nice to hang out with them a bit. And now I'm back in BoyfriendCity, waiting for my subletter to leave my apartment (tomorrow!), and recovering from the excitement--as well as a cold I seem to have picked up along the way. Luckily it didn't hit me full-force until yesterday, when all of the work was done. Or most of it; we still had to clean up from Friday's rehearsal dinner. But now that's done, too, and I'm so so tired...with so much Homer left to read....

*I mention this just in case you thought they naturally had big rectangles for heads. Oh, unnecessary verbiage!
Posted by heu mihi at 2:13 PM

Labels: the family of jb