How much money fits... 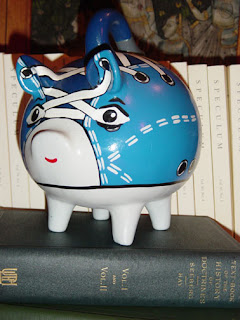 By the way, do you like the environment that I created for the pig's photo shoot? The pig is very scholarly. Given its looks, it decided that cultivating brains would be a good bet.

Speaking of brains--one of these days it's possible that I'll actually use mine and start behaving in some kind of scholarly fashion again. It's been a really slow month.
Posted by heu mihi at 3:05 PM