I've Packed Myself into a Corner 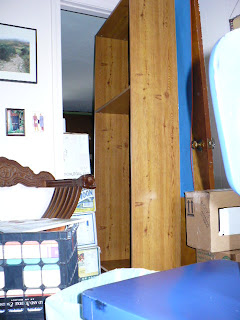 (I have since managed to clear a path out of the study. The trouble is that I'm selling my bookcases to my bartender, and they're being picked up today, so I had to move them out of the study--past the mountainous boxes of books--then move the books back into the study so that the bookcases can be moved down the stairs. It is all very complicated.)

Oh, but yes, how I do hate moving. I used to love moving. Can you believe that? There is something satisfying about purging the old crap--I still like that part--but wrapping up and lifting every single item that I own, now that I own a fairly large number of items, is less than pleasing. Yeah, that must be it. I used to like moving because I didn't own anything, and moving was basically just an exciting new re-decorating activity. Not so much these days.

This move is complicated by the fact that I have to keep three sets of boxes separate: the boxes that will go into storage (by far the largest pile), the boxes + cello that will go into my mom's house (not such a large pile), and the boxes that will move with me to Field Town. They're all labeled, obviously, but I don't trust the movers (which I will have for exactly 2 hours, including their travel time, so I don't know how much they'll actually get done) to carefully check each label before setting the box into the truck. Because I'll need to remove things from the truck in a fairly specific order, so--oh, I'm giving myself a headache.

This post is pure procrastination. I have never worked as inefficiently as I have lately. I will pack one box, making a careful list on an index card, which will then be taped to the side of the box, of every book contained therein (I think I've gone a little crazy this week, too), and then I will sit on my floor or in a chair staring at the wall for approximately 15 minutes. There is nothing in this apartment that I want to deal with at the moment. And the movers come on Friday. And between now and Friday, I am having 1) lunch with my advisor, 2) a drink with an old professor, 3) dinner with two friends, 4) dinner and/or drinks with a different friend, 5) at least one yoga class, and 6) whatever I'm forgetting. I may have actually planned more dinners than there are nights this week. Time is short; it is short indeed.

Motivating thoughts to you! I know what you mean about packing a box and then sitting in the middle of the floor and staring off into space for 20 minutes. I'm SO over moving as well!

Have a good lunch with Advisor! I hope s/he emails me back soon...

YOu are so awesome! Lists of the contents of boxes - impressive! Anyway, motivating thoughts being sent, though I think you're doing just fine. Good luck getting throught thr week!

Thanks, they're appreciated! Now I think I need to go get a slice of chocolate cake. Have I mentioned that I've been *starving* lately? Like, even immediately after I eat? I'm convinced it's a complicated plot by my body, to get me to procrastinate even more.

Good luck and don't forget to take the time to enjoy the chocolate cake along the way! (ok "smell the flowers" works better but whatever.)

PS you may find you have to cut back on labeling to simply the location you want each box to go. And don't forget that chocolate cake is a powerful motivator ---- can't you use it to bribe a friend to help pack?