Three posts in one day! What am I, some kind of blogger or something?

Anyway, as I promised about 8 minutes ago, here are some updated pictures of the garden. (As for the subject heading, I guess it's appropriate if, as I indicated about two years ago, marriage = owning a lawnmower.)

First, here's the front of the house. The dandelions have given way to clover. But don't you like my flowers? Assuming that you can make them out at all? 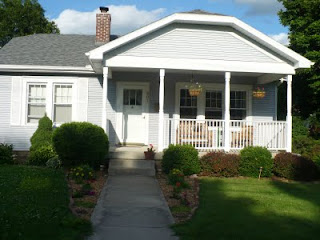 The sidewalk has come along a little bit. It's proving to be a ton of work. But look! The trees have leaves! And you can see the no-mow-zone over on the right. Don't be confused by all the tall weeds that surround it--it is in fact a distinct area. 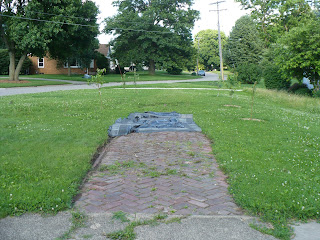 Here's the smaller garden--asparagus in the back, artichokes and eggplant in the front. Those are also various peppers and some melons mixed in there. 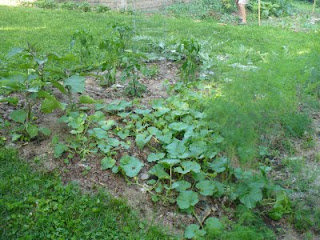 And the bigger garden: tomatoes, lettuces, chard, cilantro (gone to seed), more eggplants and peppers, beans, zucchini.... That structure in the background is the garage. 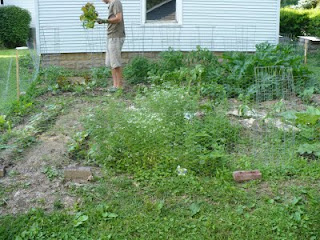 Just for kicks, here's the back of the house (which faces our neighbors) and the garage. We put in the flower boxes on the deck. In the foreground is a chestnut tree, with a container of soapy water in which to capture Japanese beetles. 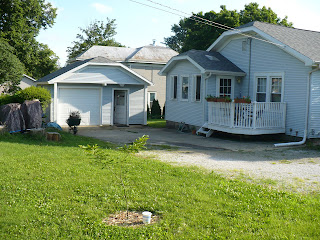 I forgot to mention our compost bins and bramble patch! We have blackberry and raspberry bushes (no fruit yet, though). 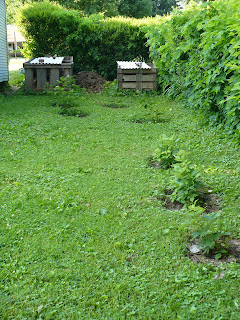 And here you can see the strawberry patch against the garage; the retractable clothesline is just visible up there, too. Against the house are the herb garden, our new rain barrel, and some landscaping that came with the house. 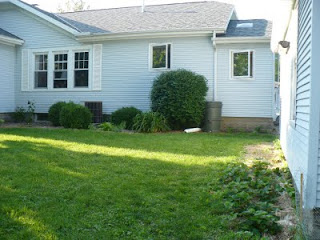 TM did the vast majority of this, by the way. Am I grateful? Why yes, yes I am. (He's in the kitchen fixing us a salad right now, too--with the very lettuce that he's picking four pictures up.)
Posted by heu mihi at 6:29 PM

I'm so impressed! I too am committed to getting rid of my (much smaller but also dandelion- and clover-covered) lawn, but I haven't made nearly as much progress as you all ... perhaps because I am married not to wonder-worker TM but to yardwork-averse D. But I will persevere and am determined to be grass-less by the start of school!

How did you even know there was a brick path under the concrete path?

The brick is under the grass, actually; we could see bits of it peeking out here and there. A number of yards around here have old brick walks in various states of revelation. (And some others have just paved right over them with regular concrete--less weeding, it's true!)