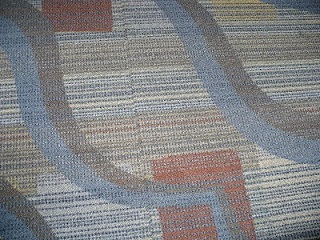 Image: Carpet at Atlanta airport. I've never visited Atlanta, but I've been laid over there on more than one occasion.
I have come to identify a particular type of male student, whom I call the Little Brothers. Does anyone else have Little Brothers? I don't really see any of my female students as Little Sisters, but perhaps that's because I have a little brother and not a sister, and the Little Brothers certainly remind me of my brother, who will always be little to me.

I love Little Brothers. I really do.

Here's what a Little Brother is, for me:
The Little Brothers aren't big-time fans; they typically aren't majors, and sometimes I don't see them much after Comp (which is where I seem to meet most of them). But when they're sitting in my office, talking over a question about one of their papers, I feel such a tenderness towards them and a desire for them to have a nice life--well, it's almost like pity, my compassion for these guys. I don't think that they deserve these feelings any more than my other students--in fact, put that way, they certainly don't; all of my students are entitled to my well-wishing (until I have a real reason to withdraw it), right?

But that's no reason to diminish my compassion for the Little Brothers, especially because there are other types of student--mostly first-years, who are so much more on the surface and young than upperclassmen--who tug at my heartstrings for different reasons. I think that perhaps I shall attempt to articulate a highly subjective typology.

(And yes, I'm aware that this makes me sound like a Universal Mother sort of professor. I'm not that, I don't think--but I do inhabit a rather nurturing role with my students, and sometimes I feel like I shouldn't because I'm a good feminist and that's playing to stereotype. But fuck it--I'm comfortable encouraging and nurturing and getting along with my students, and it makes my days so much better than being all exacting and harsh, especially given how much time I spend with students. Plus, the latter is very much not the culture at Field, for men or women.)

What about you? Do you perceive your students within your own set of arbitrarily defined categories that make you love them even without knowing much about them? (And let's focus on the positive, here--no fair trouncing whole groups, which is also a lot less interesting, I think.)
Posted by heu mihi at 7:59 PM

I have them in spades this semester. They inhabit the medieval survey. There are many subtypes, and some can be a trial, but what I have this semester are the friendly, happy medieval nerds -- think too much Monty Python rather than too much D & D. They are Super! Enthusiastic! They visit the office to talk about their particular passions. The only worry I have is that, in the numbers I have them this semester (about 60% of my survey class), they might shut down the non-nerds.

The theater majors. About half of them are excellent students and the other half are complete flakes, but what they all have in common is a particular brand of extraverted enthusiasm which is rare among English students. And they all want to talk about what they learned in their summer acting workshop, or on their tour of the Globe, because they're studying their passion and they live in a world where there isn't a bright line between School and Not-School.

I don't know whether I'd want a whole classful of them; the flaky ones can be VERY flaky. But there are always three or four in the Shakespeare class, and I love that, because they're like leaven for the whole group.

I know exactly the kid you're talking about. And while we're at it, your paragraph about inhabiting a nurturing space without being the universal mother is yes! exactly! woot!

Other types in my classroom...My death and dying class attracts a class of social misfits that one of the students in my first dd course called the trench coat mafia and that's how I still think of them.

In my theology classes at Catholic U, I have a mental categories for Boys from Fancy Jesuit Prep School (I heart them, their classmates do not) and Good Catholic Girls.

Secret fondness for the students (mostly but not always boys) who use their intelligence to be cynical.

This is fun! I love hearing about your own awkward/cynical/adorably geeky enthusiasts etc.

Alas, my own little brother was a bit of a blond, funny jock, so I never think of the nerds as akin to him.

I have: the Pretty Boy Gangstas. Usually black/hispanic/otherwise brown, very cute and very in love with their own powers of cuteness, low-riding jeans, leave their cellies on in class, write single paragraphs where they should produce whole papers, sit slouched in pimpin' cool in the back row. They have frequently been able to slide by--with female instructors--by virtue of their sweet sloe eyes and smooth talking, and/or by intimidation. Their academic skills are weak, but they're generally smart. No one has ever really challenged them. Frequently, their instructors have been afraid of them. And so we spend the first few weeks jockeying back and forth before they realize that I am actually in charge, I am going to hold them accountable, and that, alas, being 19, a bit menacing and generally attractive will NOT get them a passing grade.

Then, they fail a couple papers. They are stunned. And then, somehow, we become Best Friends Evar.

Also, of course, the queers. They're here, they're everywhere, they bombard my office hours...