Yes, I know. The cat-blogging really must stop. But it's like I've opened a valve or something....

Actually, it's just been a really cat-intensive week. Here's what happened.

On Wednesday night, TM was on his way home from a late meeting (he's the faculty rep to the Student Senate, a thankless task if ever there was one). We live across the street from a graveyard, and the easiest way to get to campus is to cut through it. So he was walking home, through the graveyard, when he heard a peculiar chirping noise. And sitting on a tombstone was a tiny little kitten, squawking away.

He approached and she scampered. Of course he followed; she led him to a bush in which she promptly curled up, allowing him to lightly pet her back a little bit.

TM came home and got me, the cat carrier, and a bag of treats, determined to rescue her and take her to the shelter the next day. But the kitty was spooked and led us on a merry chase around the darkening graveyard, squawking all the while. At last we abandoned her and decided to come back the next day, leaving a few treats on her favorite headstone (where TM had first seen her).

Thursday morning, TM left for the office before me. When I was getting ready to go, he called: The kitten was in her bush and he'd been able to pet her. He suggested that I bring treats; she's really thin, he said. "Bring your camera, too," he said. "I think that we could find a home for her if we showed her picture around."

Behold: the kitten in her natural environment. 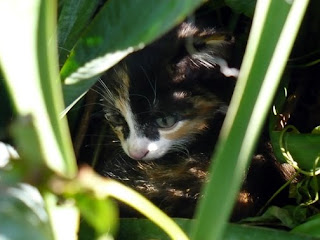 I gave her a few treats. She was really hungry, and also uncoordinated, so I had to hand her the treats to get them into her mouth. Annnnd of course one fell down and she mistook my finger for a tasty tidbit and bit down. Hard. It bled. Lots.

Now, did you know that cat bites--rabies risk aside--are actually incredibly dangerous? Really. You can get staf infections and need amputations. They are Not Good Things.

I gave her a little more food (just to prove to myself that it was an accident and she wasn't vicious, nor had I personally offended her) and took myself off to campus to clean up and call the doctor's office. And the vet's office. Long story short, I decided to cancel class (reluctantly) and go to the ER: Waiting until an afternoon appointment just didn't seem wise, given the rapidity with which these infections can spread.

They soaked my finger in a solution for 10 minutes and gave me a tetanus shot and five days' worth of antibiotics. I was able to make it to my afternoon office hours, at least.

Meanwhile TM caught the kitten and put her in our attic guest room, where she is now living. She is, quite simply, a delight. Squeaky-voiced, clumsy, frisky, scampery, etc. etc. She likes to sleep on our laps and rub her face against our noses. We're trying to find her a home (ideally we'd like not to be outnumbered by the felines), but as the days pass...well, you know how it goes.

So here is Kittenfoot, in all her bug-eyed glory: 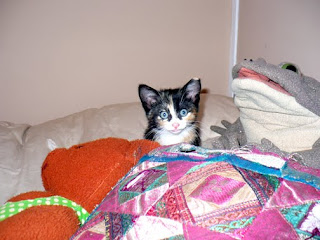 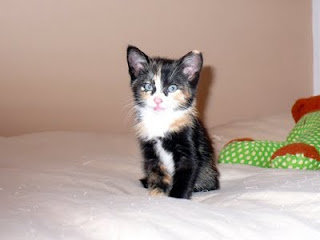 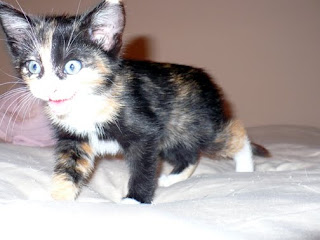 Look how wee she is! 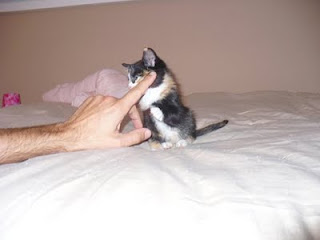 Aww! So much cute!

This simply is too much cuteness for one day. I would take her NOW if I could. I love, too, that you live across the street from a graveyard.

I love that you have found a guy who walks through graveyards and takes in cats --- that he's not completely anti-cat is kind of amazing to me, considering the guys I hang out with.

Oh, teh itteh bitteh kitteh! And ow, your finger! I wish I knew somebody close enough to adopt her.

Quick: it's a cuteness overload! We need 2 ccs of ick, stat to counteract the cuteness effect! Auugh!

(And I think you should name her ghost.)

How adorable! And the name "Kittenfoot" is amusing me, since my 5-year-old niece named her cat "Kitty-bone"; no one is quite sure how she came up with this name, but she also named her teddy-bear "Cutie-pants," so she is clearly into the portmanteau name.

I actually didn't know that cat bites were so very dangerous, although I did know to clean cat scratches very, very thoroughly. I hope that your finger heals okay!

She's so sweet! Neoteny, I curse you!

And on the cat-bite tip--for real, you were super smart to take it so seriously.

I had a cat bite (a single puncture from a single tooth) that sent me to the ER for a bag of antibiotics, and then back for admittance to the hospital after my armpit lymph node swelled to horrifying proportions and I found a red line going from my bite to the node. Eeep! Then, it was 2 days in the hospital with several rounds of IV antibiotics and a week's worth of oral ones once I got home.

So right on that you took it so seriously, as did everyone else. (I was so surprised when I went to the ER and they IMMEDIATELY admitted me; I thought it was no biggie, but clearly, it was my bite and the gunshot wounds who were getting seen, so...)

Ah, you know that one cat just leads to another. And she's just adorable, but OMG how tiny! Given the blue eyes and her size, she's gotta be really young. The vet is in her near future one hopes.

Some vets will go over strays free or at very low cost to make sure they're healthy and then even help with finding new homes. Personally, I think she's found the people she needs.

Bless you for helping such a tiny lost soul.

I want her. My daughter--who has been talking more and more about wanting a kitten--would love her. Too bad we are so far away . . .

And I'm glad your finger is okay! Good for you for going into the doc...

It sounds like you have been adopted! She's meltingly adorable.

What a cutie! And so little to be out on her own! (heart melts)