In which I become one of those cat-posting bloggers!!!!!

I am posting to post, because I've just sat down at my computer and have nothing to read (get crackin', yo!), and I do not want to get back to work right now. No, I do not. Not that today was particularly hectic or exhausting or anything, although I am exhausted, in part because Darling Kitty no. 1 (let's call her Priss) came a-knockin' at 4:35 this morning and I had a hard time getting back to sleep before the 6:15 alarm. (Luckily, Darling Kitty no. 2--henceforth Pertelote--has the fond habit of mewling loudly at the door for breakfast approximately seven minutes before the alarm goes off, thereby ensuring that we do not oversleep.)

When Priss wants in the bedroom, it is a pathetic thing. Oh, the languishing, pale mews! The tiny paw scratching so softly, oh so softly, against the base of the door! How easy it is to picture her swooning away, her voice so weak from the effects of being left out in the cold, cold (actually rather warm) hallway! Oh! Priss!

Pertelote, on the other hand, bawls insistently, as she is demanding breakfast, not the special bathroom cuddles that Priss favors. Yes, what Priss wants to do is to race you into the bathroom, thrust her head against your foot, and purr like a maniac. Pertelote is all for the cuddling but would really prefer some food, now please damn it (only Pertelote would never say "damn it," for she is the picture of innocence, if it is a peculiar brand of self-absorbed innocence. Truly,Pertelote has no guile).

So, since this has turned into a cat post (the first ever on this blog!), I shall now append some pictures of the cats, which were a part of TM's dowry. First, though, I will have to find batteries for the camera, download the pictures, and shrink them so that they will not take thirty minutes to upload to the blog. Hold on a minute.

OK. This is a little series that I call "Conquest," in which Priss (the black one) and Pertelote (the tabby) vie for the coveted study window. 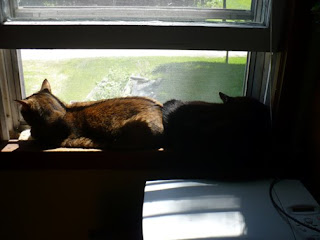 Pertelote has taken Priss' favorite spot, but Priss manages to wedge herself into it regardless. 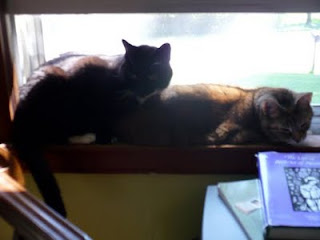 Priss tries for some revenge. This has got to be annoying, she thinks. 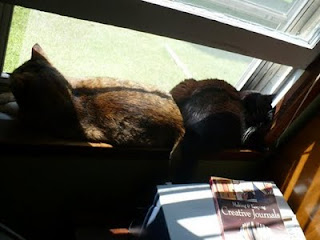 Still, Priss has a few tricks up her sleeve. 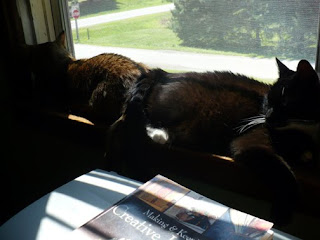 The efforts at expansion seem to be working! 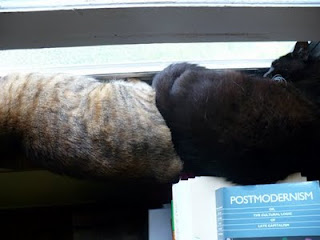 --But again, Pertelote proves an unstoppable force, and Priss is wedged into smaller and smaller spaces. 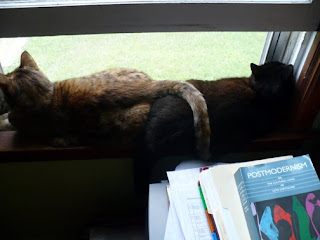 They consider a compromise... 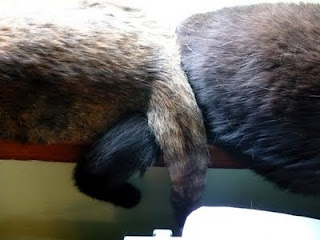 ...and an uneasy, probably short-lived peace is achieved.

LOL! Our three cats compete for window space, too. Fortunately, most of our windowsills are low to the floor and wide enough for two or three kitties to share - not that that stops the jockeying for position :)

I think TF's "dowry" consists of a lot of video games and comic books. Would that there were kitties!

He does get my dog, who he loves dearly, though.

The real question is, will they wear costumes? (go see squadratomagico for explanation.)

If only congress could compromise in such high fashion.

Ditto Pocha's comments. With a simple tag: a compromise with such finesse.

Those are great pictures! I, too, love squashed cat butts...

I love how we can see the evolution of your work over the course of the afternoon. First the table on the right has no books, and slowly the pile of reading material rises from something with a Victorianish-Mediaevalish woodcut to end with "Post-Modernism."

Re: the cats, I think pretty soon you'll be sleeping through the darling kitties unless you're already having a bad night. At least, that's what happened for me.

Hope--yes, I think it adds to the narrative, don't you? I just haven't figured out exactly how....

(And is that the Hope I think it is? We need to catch up!)